Creative Footsteps was a project based along the Wessex Ridgeway led by local poet, James Crowden. The 65 mile long Wessex Ridgeway track is a rich tapestry of chalk ridges, steep grassland fileds, copses and thick ancient hedgerows. The Ridgeway enters Dorset from Wiltshire at Ashmore, crosses the Blackmore Vale before finally descending to the sea at Lyme Regis.

James walked the Ridgeway and, on his travels, wrote poems which reflected the geography, geology and natural history of this long distance path. Sections of verse were then incorporated in to specially commissioned sculptures, which were installed along the route from Ashmore to Lyme.

All of the sculptures and scenes of the Ridgeway were documented by photographer, Catherine Batten, and a CD featuring the' Sounds of the Ridgeway' by David Rogers were available to purchase with the Creative Footsteps publication from the Artsreach Office.

Limited copies are still available for £10. 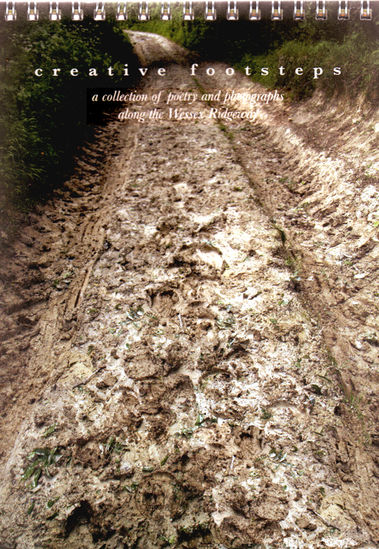