Tales From the Village- YETMINSTER

selected stories from 'The Book of Yetminster'

Benjamin Jesty and the smallpox 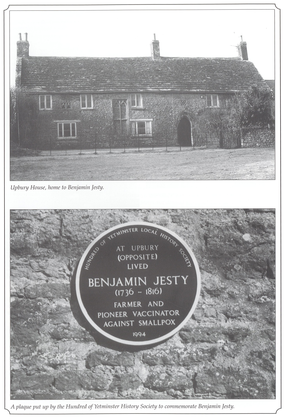 Yetminster is a village of historical importance, for a number of reasons. Perhaps first, and fittingly, during this current world crisis, is Benjamin Jesty; Yetminster's most famous inhabitant.  Jesty, a farmer, is a pioneer of vaccination, but sadly he is not as well known as he deserves to be.

Jesty was convinced of the folk tale that milkmaids who contracted cowpox during their work somehow became protected against smallpox. During 1774, in the face of a smallpox epidemic, he vaccinated his wife and two sons with cowpox lymph taken from lesions on the udder of an infected cow. Jesty devised and undertook his vaccination method 22 years before Edward Jenner, who is usually credited as the originator of the same practice.

When an epidemic of smallpox came to Yetminster in 1774, Jesty decided to try to give his wife Elizabeth and two eldest sons immunity by infecting them with cowpox. He took his family to a cow at a farm in nearby Chetnole that had the disease, and using a darning needle, transferred pustular material from the cow by scratching their arms. The boys had mild local reactions and quickly recovered but his wife's arm became very inflamed and for a time her condition gave cause for concern, although she too recovered fully in time.

Jesty's experiment was met with hostility by his neighbours. He was labelled inhuman, and was "hooted at, reviled and pelted whenever he attended markets in the neighbourhood'". The introduction of an animal disease into a human body was thought disgusting and some even "feared their metamorphosis into horned beasts". But the treatment's efficacy was several times demonstrated in the years which followed, when Jesty's two elder sons, exposed to smallpox, failed to catch the disease.
In 1805 Jesty received an invitation to visit the offices of the Original Vaccine Pock Institution in London. He accepted, and was accompanied to the capital by his eldest son Robert. The physicians, surgeons, and apothecaries of the Institution asked Jesty about his vaccination “experiment” and received Robert’s permission for him to be publicly inoculated again with live smallpox to prove he was still protected against the disease. 12 of the Institute’s examining officers were signatories to a statement of the “antivariolus efficacy” of Jesty’s vaccinations.

He eventually relocated to Worth Matravers where he lived out his final years, but a commemorative plaque resides on the wall of his original home in Yetminster.

The Yetminster Church and Clock 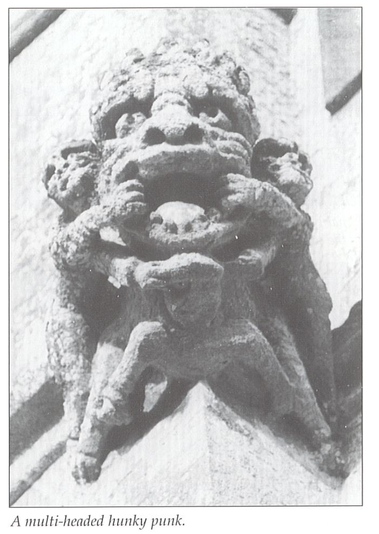 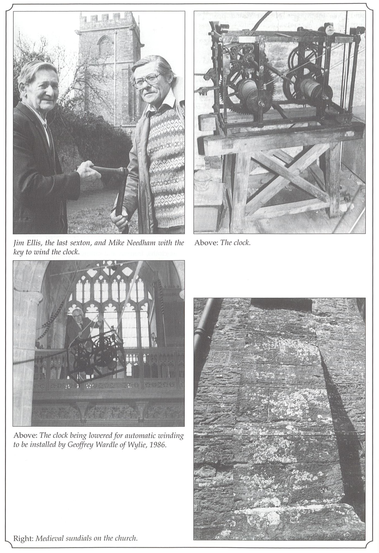 The church of St Andrew's in Yetminster in parts dates back to the Saxon era, although the majority can be dated to the mid 15th century. The church contains five bells and has a 300 year old faceless clock which which chimes the National anthem several times a day; the chimes were installed to celebrate Queen Victoria's Jubilee. The clock was built in 1682 for Yetminster by Thomas Bartholomew.  The outside, like other Somerset churches of this era, had a number of hunky punks (multi-headed gargoyles) adorning the walls.

Robert Boyle was a pioneer of modern chemistry who is best known for Boyle's Law.  He grew up in Stalbridge , and when he died left an endowment for the provision of a school for poor boys in the district.  The link with Yetminster was through his servant, who had grown up in the area and was one of the executors of his will.

Boyle's Charity School for 20 poor boys was constructed in 1697 and functioned as a school between 1711 and 1945.There is a blue history plaque commemorating the original building in Yetminster.

With thanks to David Thomson for kind loan of the Book of Yetminster and retelling the stories. 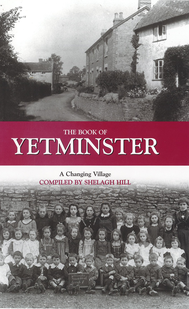