Tales From The Village- WINTERBORNE STICKLAND 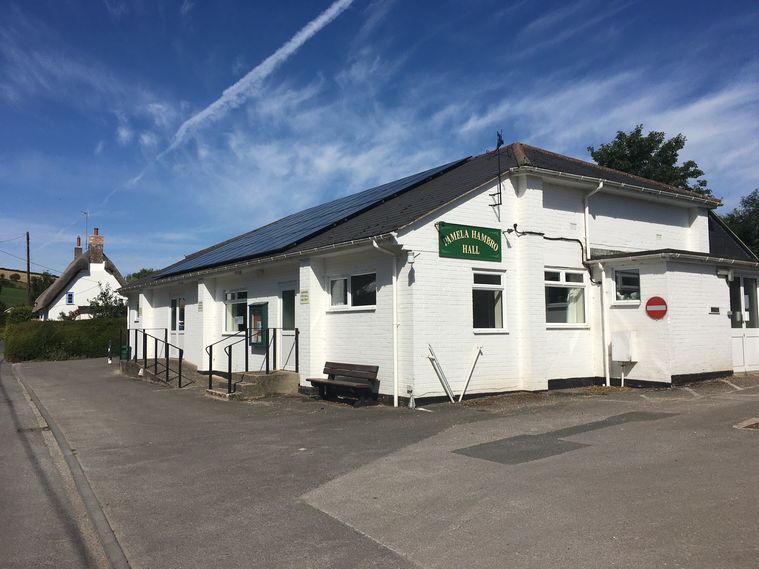 Artsreach first came to Stickland some 27 years ago in 1993.  At that time Stickland and its near neighbour village of Winterbourne Houghton enjoyed a wide and varied range of community based activities.  The Sports Club was very active and had within its franchise various football and cricket teams, a Tennis Club and a Nine-pin Bowling Alley. The village pub was host to two darts’ teams and two very successful Shove Ha’Penny teams which yielded both the Men and Women’s World Champions on more than one occasion. The Village Hall was home to numerous groups, clubs and societies, including a branch of the Women’s Institute, a Horticultural Society, a Craft Guild and a Pantomime Group which, for many years, produced the annual village Panto and occasional stage plays. Sadly, many of these groups and activities have disappeared over the years, although there has recently been a resurgence of a few and some new groups have come into being.

In 1990, a small loosely-knit group headed up by Chas and Jackie Upton and me and my wife Tricia, after hosting a couple of incredibly well- attended Village New Year’s Eve parties, decided that we ought to begin organising events to be held in the Village Hall. We had wide ambitions and to reflect this we called ourselves the Stickland Party, Arts and Music group (SPAM) and soon we were joined by other villagers of a similar bent.  SPAM was strong on the Party and Music elements but less so on the ‘Performance Arts’. We were also aware that there was almost a complete lack of stage and theatrical performances by artists and groups from the world beyond the two villages. Then in 1993 Chas Upton brought news that a fledgling Dorset Organisation called ‘Artsreach’ had just been formed with the explicit purpose of taking the Arts out into Dorset’s villages. With fingers crossed we decided to ‘give it a try!’

Our original four founders duly attended a promoters’ evening chaired by Ian Scott and Angie Green. Impressed by what we heard we put the Stickland Village Hall forward as an Artsreach venue and volunteered to promote three shows in the coming season, thus making Stickland the first Artsreach venue in North Dorset.  As the years have passed we have  realised just how fortuitous the decisions made that night turned out to be. Our first Artsreach promotion arrived at the Village Hall in October, 1993.  It was a one man show performed by Phillip Manikum, a Shakespearean actor, and was called ‘Scouting for Boys’.  The show attracted a good audience and was, by any measure, a tremendous success. Phillip performed the show on the floor of the hall with only a small tent as a prop while the audience sat around it in a semi-circle as if at a Scout camp site. After all these years the show is still remembered clearly and affectionately in the memories of all those who attended that night. Angie Green, who sadly passed away earlier this year, commented that for her it fully represented the purpose and ethos of Artsreach, bringing first class performances to Dorset’s smaller villages. 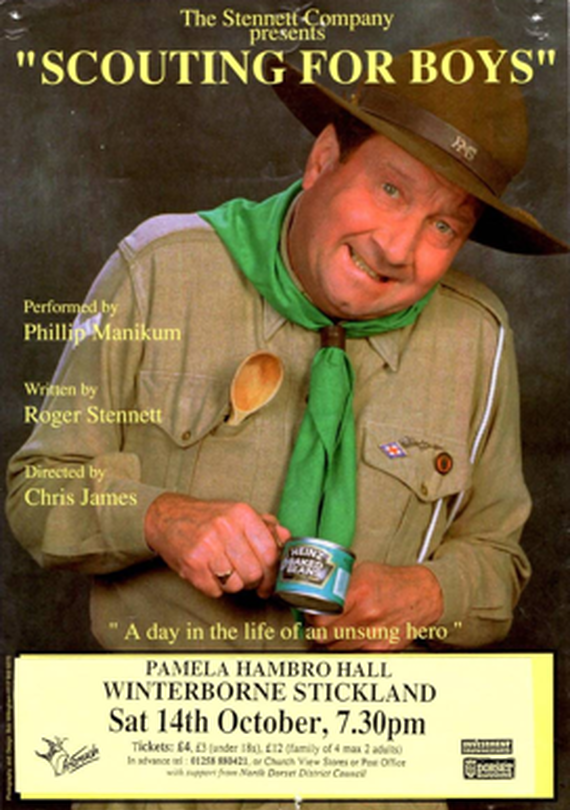 News of the show’s success rapidly passed around the two villages and tickets for our next promotion on the 16 December completely sold out.  This second promotion brought the memorable and fabulous original ‘Old Rope String Band’ to the village and a rapturous audience left to spread the news of Artsreach still further. The undeniable success of these first two productions assured the future of Artsreach within the village, which has continued right up until the present day.

For the Artsreach shows promoted by SPAM there are simply too many to refer to them all but some, for whatever reason, stand out in the memory. Graham Moor’s evocative musical ‘Tolpuddle Man’ was both a moving and inspiring retelling of the tragic story of Dorset’s Tolpuddle Martyrs. The Budapest Cafe Orchestra, for whom we turned the village Hall into a Hungarian Cafe and served spicy Goulash as the main dish cooked in 8 slowpots across the village, was an experiential hit. Richard Derrington’s one man show ‘Taylor’s Tickler’ was so unforgettable that we brought him back to perform his other two shows, ‘My Kingdom for a Horse’ and ‘Shakespeare’s other Anne’. Similarly Alison Neil’s one woman show, ‘The Sixth Wife’, was so mesmerising that we called her back for her other show, ‘Bella’. These one person shows were even more remarkable in that the performers, with the exception of ‘Taylor’s Tickler’, had also written their scripts. Spymonkey brought the somewhat notorious ‘Cooped’, possibly Stickland’s only show that included active nudity, as three rather portly gentlemen, wearing not so much as a fig leaf, displayed their wares to a rather shocked front row of elderly village ladies. The show was a great hit. ‘Professor Heard’s Magic Lantern Show’ demonstrated that magic lantern shows were much more than a series of still slides, so much so that we brought him back for a second demonstration.

Alongside the Artsreach promotions SPAM had continued to organise other in-village events including a three day programme to mark the 50th Anniversary of VE day and a Village History as part of the Millennium Celebrations. In 2005, however, because of increasing age, other commitments, changed circumstances, etc, the core SPAM team felt that it was time to ‘pass the Artsreach baton’ on to others.  We made early announcements of our decision and asked for someone or some group to take on the Artsreach brief, unfortunately to no avail. It was with great good fortune therefore that soon afterwards Graeme Gale and Stephen Baughan heard Ian Scott discussing the possible loss of Artsreach in Stickland. They joined the conversation and, enthused by Ian’s commitment, Graeme decided to pick up the baton to continue bringing Artsreach promotions to the village with the able assistance of his wife and daughter, Marilyn and Louise, Stephen who had been with him at the meeting and Geoff Brown from the village.

The first show promoted by Graeme and his group was the musical band ‘Quimantu’ who herald from Chile. Their performance brought feelings of sunshine and cheer to the Hall, so much so they have been brought back on two occasions. ‘Standout’ shows from those Graeme and his team have promoted include the experiential and totally innovative ‘Our June’s Wedding’. This show began with an incredibly realistic wedding in the Village Church presided over by our own genuine village vicar the Rev. Alan Ryan. Following the wedding ceremony the whole congregation moved to the Village Hall for a ‘wedding tea’ which in ‘story time’ was one year after the marriage in the church. Everyone who attended came dressed as if for a wedding and this greatly added to the surreal reality of the show. All who attended remember it with great affection. A totally different show was staged by the zany Cosmic Sausages, a mad cap band who during their performance meandered through the audience stealing drinks as they went. One of the most technological shows was a story telling by Nick Hennessy called ‘Fire in the Northern sky’. In his performance Nick was joined by three musicians and two technicians, the musicians providing an amazing array of sounds to support the telling while the technicians provided quite incredible lighting and visual effects.

Over the past 27 years our Village Hall has been the venue for over ninety unbelievably varied Artsreach promotions. They have ranged from one-person shows to large theatre groups, from a variety of dance troops to music from individual and groups of musicians playing all forms of instruments (the Serpentine to classical acoustic guitar) and from a variety of origins (South American to Polynesian, to Russian), from magic to comedy, from readings to poetry, from children’s shows to various exhibitions. All of these events have only been able to take place through the support and cooperation of an army of volunteers who work to make the shows happen, from preparing the Hall for an event to providing overnight accommodation, and sometimes sustenance, for some of the performers. Without this often unsung army of helpers Artsreach would not have survived in the village and they deserve, each and everyone, our thanks and appreciation. Nor would Artsreach have survived without those loyal and trusting folk who make up the very necessary audiences. Their, your, attendance is always appreciated and valued by promoters and performers alike. While ‘profits’ have never been a driving force and have never been huge, they have been made and used to provide financial support to a wide range of groups within the local and wider community, including Artsreach itself!

So there you have it. A brief and potted account of Winterborne Stickland’s love affair with Artsreach. Our participation with Artsreach has enhanced the village’s feeling of community, extended friendship networks and enriched the village’s experience and enjoyment of the Arts in all of its many forms. We, the two villages of Winterborne Stickland and Houghton, are exceptionally grateful and appreciative of what Artsreach has given us. Long may it continue.

'In the second week of March, I developed symptoms of Covid-19. It was early April before I ventured outside much - basically I stayed indoors for four weeks. Once we were permitted to exercise (unless we were Dominic Cummings!) I took to my bike in the beautiful spring sunshine to see bluebell woods and see eerily quiet country lanes and villages.

The churches were all “visited” on rides between April 9th and May 28th. Initially they were Incorporated into postcards (attached), but as the list of churches grew I needed to tackle a bigger format and so progressed to A4, which itself proved too small. There are lots of churches...


The striking blue skies, the quiet of the countryside and the abundant bird life and song made this a distraction from the unease and worry at the height of this part of the pandemic.'