Tales From The Village - Martinstown

"Sheds have never been part of my life. In childhood the cellar was the only place for stuff such as ancient pairs of skis, gas masks, several mould- encrusted trunks and suitcases with rusting locks, warped tennis rackets and other unwanted detritus from years past.

A visit to the cellar was always an exciting adventure: a flickering lightbulb guiding the descent; the smell of damp growing stronger the further down you went.
I am not a hoarder- if I haven’t used or needed something for a year or so then off to the tip or charity shop it goes. Not so for my husband Chris who yearned for a shed and always had an excuse for hanging onto stuff  “You never know, I might need that one day.”

Eventually the Old Brewery house in Martinstown became home for us and our two boys. At last! Chris was in his element as the property included a barn ideal for hoarding all sorts of rubbish including his precious tools.

Years later, due to circumstances, we moved into Stevens Farmhouse with limited accessible storage and so the barn had to be cleared out. ‘Time to get rid of all  unnecessary clutter!’ I thought but my joy was cut short as he announced that he had secured the village pound, also known as the Lock-Up, (sited next door to the church.) And so the collection of extraneous rubbish continued...

Chris could usually be found messing about in his lock-up where if he wasn’t pottering around inside he would sit outside, perched on an old garden chair, wearing his famous pink wellies (pictured) chatting to everyone who passed by. Ladies in particular were always greeted with “Hello gorgeous!”

Sadly in 2012 Chris died and the Lock-Up had to be returned to the parish council. What should I do with the contents? It was filled with tools great and small, bikes, boat bits. Every object connected to so many memories- a bell which he had removed from around the neck of a dead sheep found high up a mountain in Majorca, and so so much more?

As a family we decided that a garage sale was the best solution. It was advertised and on the appointed day friends and neighbours swung into action with books and bric-a-brac stalls, the WI served tea and cakes, dealers arrived and the Lock-Up was slowly emptied. A fat cheque was posted off to Marie Curie from the result of the earnings. The end of an era! I know there is more in the loft but I’m still plucking up the courage to tackle that. Tomorrow perhaps?..."

Setting up for Martinstown Open Gardens

"It's early July several years ago and the keen gardeners in the village have been mulching, cultivating, deadheading and grass cutting in preparation for the bi-annual Open Gardens.

And now it's Friday afternoon and everything is almost ready. Martinstown village store is well stocked with ice cream, home-made cakes and delicious fruit loaves. The village hall has been prepared with tables and chairs in place, cups and saucers are stacked up waiting for the first customers to arrive. There is only one task left- the erection of a giant gazebo. Later, this will be the location where strawberries and cream will be washed down with a delicious glass of Pimms whilst local musicians enchant and entertain the crowds. 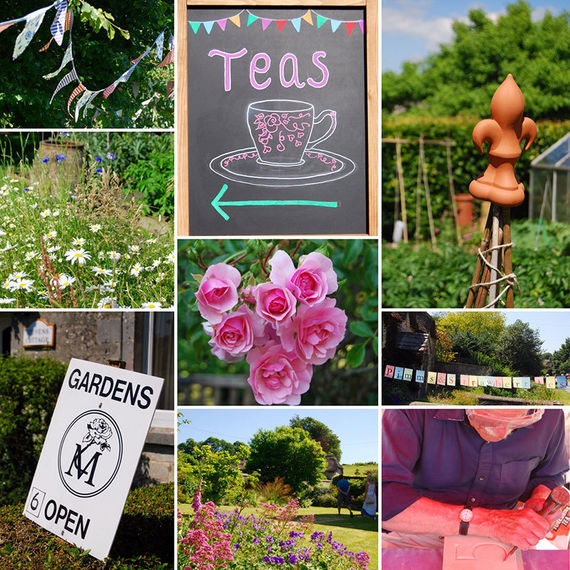 And so a small group gather on the village green. They peer down at the huge heap of canvas and poles: one  small problem, no instructions...

“I know! Dick will have them!” shouts Jan.  She sets off only to return several minutes later with,“He’s not there!”. So the decision is made to get on with it.

Work starts; poles are selected, attempts are made to slot the poles into the pointy roof. The structure collapses, resulting in peals of laughter. Back to the beginning over and over again, even as it starts to rain and the wind picks up - the situation feels helpless!

Suddenly a dog walker appears from nowhere. Within minutes he has taken charge and assembled the whole thing. He leaves to a chorus of “Thank you, thank you!" and "How did you do that??" He just smiles and continues on his way.

It is at this point that Dick appears. “What the hell are you doing?” he enquires, and “I’ve got the instructions, you only had to ask!” as he is caught up with the goings on in no uncertain terms. A howl of derision greets these golden words.

Needless to say the open garden is a great success. The sun shines, many glasses of Pimms are drunk and enormous slices of cake are consumed!