Tales From The Village- BRIANTSPUDDLE 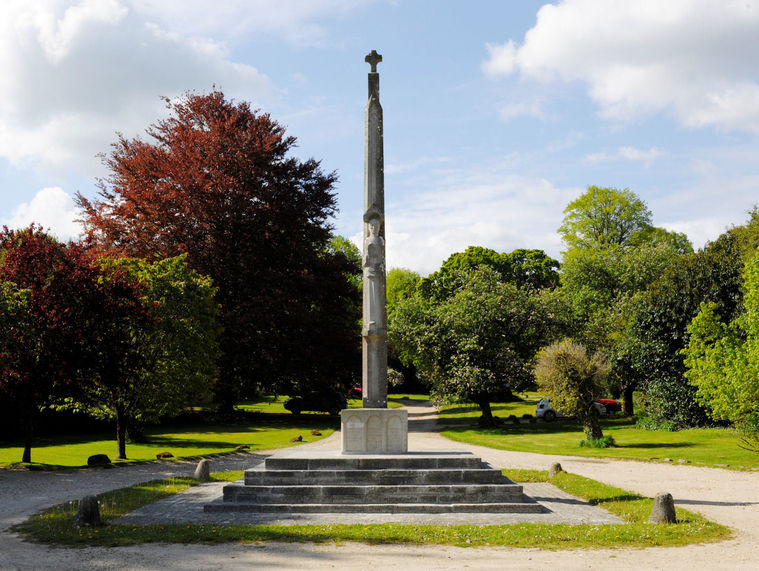 In the spring of 1914, just before the outbreak of the First World War, Ernest Debenham (one of the wealthy owners of the department store, Debenhams) bought a large block of land at Briantspuddle, Affpuddle and Turnerspuddle from the Framptons of Moreton.  Over the next ten years he bought in more land from local estates and farmers eventually extending his estate to 10,000 acres, calling it the Bladen Estate.

Ernest Debenham’s (later know as Sir Ernest, knighted for his services to agriculture) idea was to run the estate on experimental and self-sufficient agricultural practices and to give employment to those in the countryside.

He was also a keen advocate of the Arts and Crafts Movement and through his connections with this he employed the firm of Halsey Ricardo, architect and one of the founder members of the Movement, to act as his architect for the buildings and houses on the estate.  Halsey Ricardo had already built the Debenham’s house, ‘The Peacock House’ in Addison Road, London.  He was keen to use local materials such as cob, brick and thatch, and also set up his own block-making workshop using local sands and gravels. 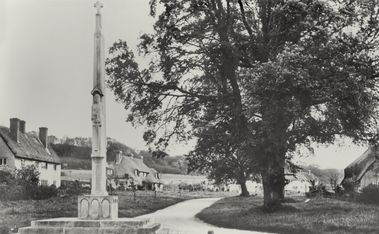 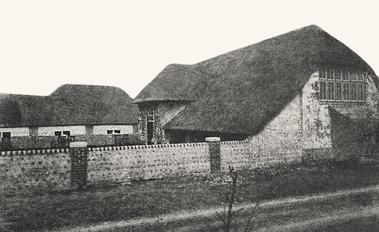 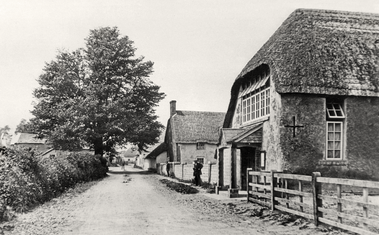 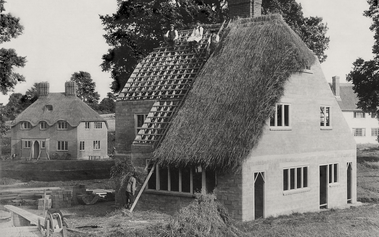 Halsey Ricardo contracted his friend MacDonald Gill as supervisor and on site architect, designing and overseeing the building of the estate houses, dairy etc. and in late 1914 MacDonald Gill (known as Max) came down to live in Turnerspuddle, travelling by train to Wareham and then by bike to Turnerspuddle.  He lodged with the Hooper family at Turnerspuddle Farm, later referred to by Max’s friend John Nash, as that ‘rather grim family’.

At the outbreak of war Ernest Debenham encouraged all his employees between the ages of 19 and 30 to join ‘Kitchener’s Army’ and to do their bit for Britain, but retained Max’s services as he reasoned he was more useful on the agricultural front.

In 1915, Ernest Debenham commissioned Eric Gill, Max’s brother, sculptor and calligrapher,  to carve a ‘village cross’.  Eric came down to Dorset and chose a piece of Purbeck stone from a quarry in Langton Matravers and took it back to Ditchling, Sussex, where it would be carved, with the figure of Christ, sufferer but also judge, with the sword of judgement in his left hand, on one side, and the Virgin and Child on the other. 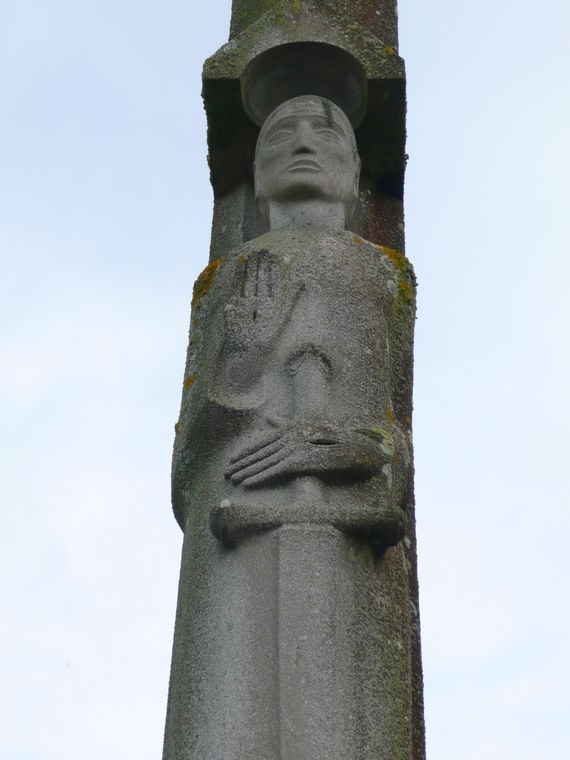 In May 1917 the cross was loaded on to a horse-drawn cart, along with a barrel of cider and a leg of ham and Eric, his friend and fellow calligrapher Hilary Peplar and the driver Fred Mockford drove the cross to Briantspuddle, taking two days to complete the journey! The cross was erected at the bottom of Bladen Valley, the street of houses for the agricultural workers that was still under construction.

Ernest Debenham felt that as the village had suffered many losses during the terrible conflict of war, seven men in all, that the cross should become a war memorial to those brave soldiers who had lost their lives. Eric was summoned back to add the names of those men and also an inscription round the base, from the words of Julian of Norwich ‘It is sooth that sin is cause of all this pain, but all shall be well, and all shall be well, and all manner of things shall be well.’

The memorial was dedicated on 12 September, two months before the Armistice was signed, by the Right Reverend Bishop of  Salisbury: “It is standing here, please God, for all time, standing here as the Village Crosses in old days used to stand in countless villages, as a great tribute of reverent regard to those who have  given their lives in the service of their country and in the cause of Righteousness, who in a dim sense reflected His dedication to us, of which this Cross must ever speak.”

Thus it became the first War Memorial in the country.