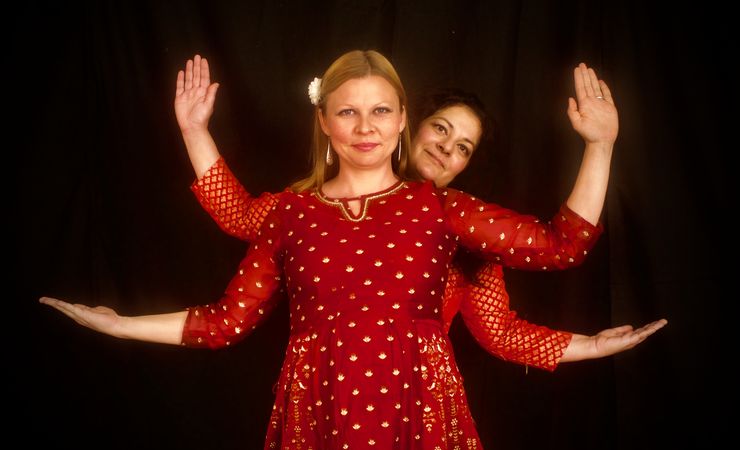 Ganga - Tales of the River

A fusion of live music and storytelling inspired by Indian myths

When the River Goddess leaps from the skies, only Shiva's hair can catch her wild torrents. But still she roars, surging from mountains to sea, leaving no stone - or ego - unturned as she washes illusion from the truth.
In the heavens, bored brothers steal the holy cow and face a terrible punishment - a life on earth!
A king has more sons than space, but taking a fancy to the Sky God's palace is never going to end well.
A woman journeys deep into the kingdom of death to demand the impossible.
And when a tiny fish flips out of the river, a young girl holds the end of one world and the beginning of the next in her hands.

Storyteller Emily Hennessey and acclaimed sitar player Sheema Mukherjee have been fusing live storytelling and music for many years, specialising in Indian mythology with music that draws on both Indian classical and contemporary traditions. With a style that is highly accessible and deeply engaging, they have toured a wide range of venues including British Museum, Soho Theatre, York Theatre Royal and The Ancient Technology Centre.

"extraordinary tales for a transfixed audience"

An Update on Attending Rural Touring Events by Artsreach

Our community volunteers, audiences, funders and sponsors have been simply fantastic during these difficult times, and we thank everyone for their support and encouragement as we resume our indoor programme of live performances this winter.

We want to let you know that your comfort and safety continue to be our top priority, as well as your enjoyment of course. As such, we have created a simple information document about our indoor events and venues, which we will monitor and update throughout the season as required. Read our latest information document here