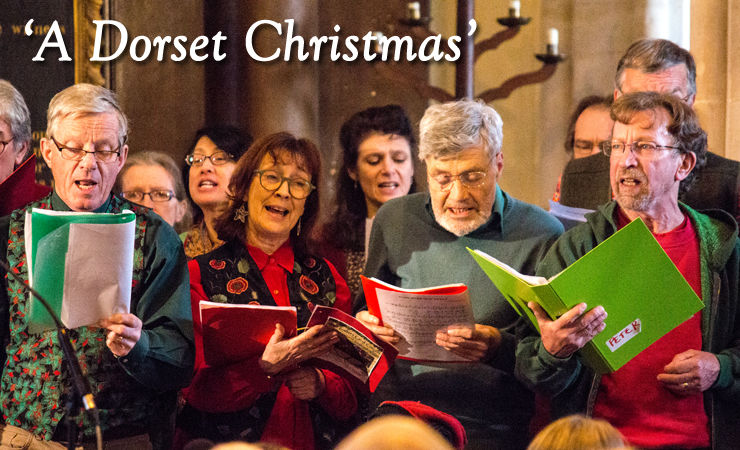 The Ridgeway Singers and BandThis event has now finished

'A Dorset Christmas' with The Ridgeway Singers & Band

The Ridgeway Singers and Band were created as part of a 2013 Artsreach project - ‘Rooting Round the Ridgeway’. Every Christmas since, the group have performed West Gallery Carol concerts in churches and village halls across Dorset - but sadly not this year. However, fear not! We are excited to announce that we have been working with The Ridgeway Singers and Band and Pageant Productions to capture an alternative festive offering on film that’s truly inspired by Dorset!

With their roots in the South Dorset Ridgeway and inspired by the rich sources of locally collected folk songs and West Gallery carols, The Ridgeway Singers & Band led by Tim Laycock and Phil Humphries have once again tuned their fiddles and voices to present a joyous celebration of Christmas past and present for Artsreach this winter.

Traditionally sung by village choirs in English country churches from the 18th century onwards, West Gallery music’s demise was brought about by changes in musical fashion and the innovations of the organ and harmonium. The accompanying musicians, usually performing from a gallery at the west end of the church, who played the fiddle, the cello and the serpent might have become no more than a footnote in history: but thanks to Thomas Hardy and his first novel, Under the Greenwood Tree, the carols that his grandfather and father played ‘Going the Rounds’, and the local traditional songs and dance tunes that they played so vigorously, have not only survived, but have been kept alive in grand style! The result is a joyful and toe-tapping musical celebration of the midwinter season.

Normally a church or village hall would accommodate the 50-strong members plus audience for the Ridgeway Singers and Band Christmas concerts; but this year, thanks to the miracles of modern technology, you can enjoy the programme in the comfort of your own home! With the aid and  expertise of Pageant Productions, The Ridgeway Singers and Band have been able to tell the story of how our forebears celebrated Christmas in Dorset through music, song, story and dance, enhancing the experience with newly-filmed readings, archive photographs and other visual images from all over the county, contributed by members of the group.

The film will include works from Puddletown and Hinton St Mary manuscripts, new carols in the West Gallery tradition, and, thanks to the technical wizardy of Phil Humphries, a specially created virtual performance of ‘While Shepherds Watched Their Flocks by Night’, as performed in Martinstown church circa 1820.

Interspersed with some sparkling instrumental pieces and midwinter stories, plus a few Ridgeway favourites, expect a heart-warming seasonal celebration of all things Dorset!

Suitable for all ages

After booking you'll receive a link to access the film, which will be be available on Monday 21 December at 4pm. Your household will be able to enjoy the film on your computer/tablet/smartphone/internet device.

We hope this enables as many of you as possible to enjoy the film!